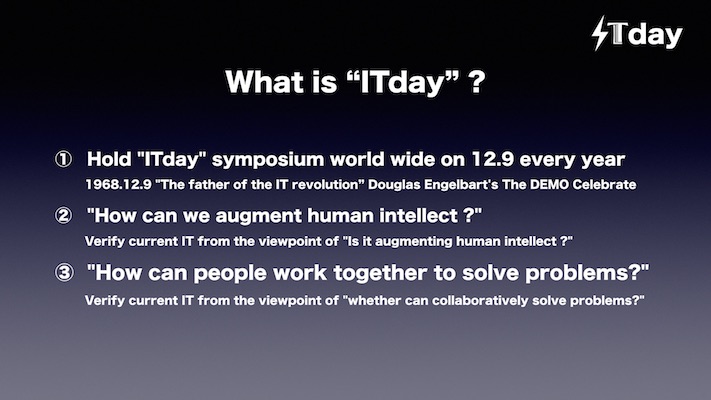 And he went into the main subject. First, he talked about what “ITday” is and why we are doing “ITday” activities.
“ITday” is the IT anniversary. On December 9, 1968, Douglas Engelbart’s “The Mother of All Demos / The Demo / The Big Demo” was held, which became the starting point of “IT Revolution”. Therefore, we set December 9 as “ITday”. Every year, we hold “ITday Symposium” all over the world, and discuss the theme of “How can we develop IT that augment human intellect” suggested by Engelbart. “ITday” is an activity to create an ideal future society “IT civil society” with such excellent IT.
The most famous of The Demo was the first time that a “mouse” was used to operate a computer. This became the starting point for the Personal Computer Revolution, opening up the computers that had previously been monopolized by experts to the general public. 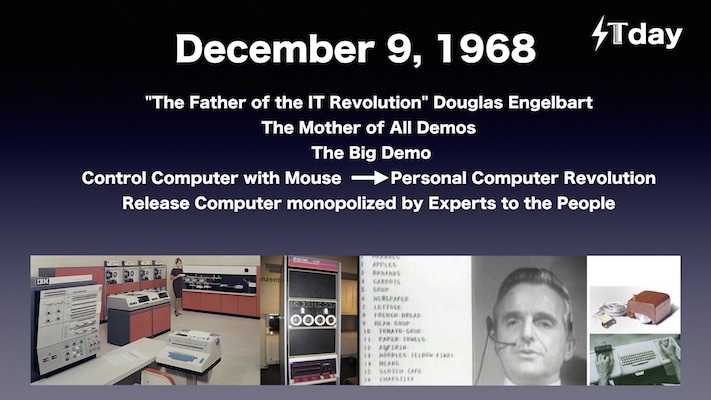 Actually, there is another important point. That is because Engelbart posted the theme “A research center for augmenting human intellect”. And he demonstrated an online multi-user collaboration system called NLS (oN-Line System). The Demo was held a year before the Internet started in 1969, and he already showed the ideal future Internet at that time. How about the current Internet compared to that? Has it reached a level that augment human intellect ? Not at all. On the contrary, fake and hate are prevalent, and rather than augmenting intellect, it seems to reducing it. Nor can multi-users work online to solve the complex and serious problems facing humanity. In short, The Demo is by no means an old tale, but pointing to the future we should aim for. Therefore, the mission of “ITday” is to propose that the general public will realize the ideal IT society of the future that Engelbart advocated in The Demo, and to expand the circle of its activities worldwide. 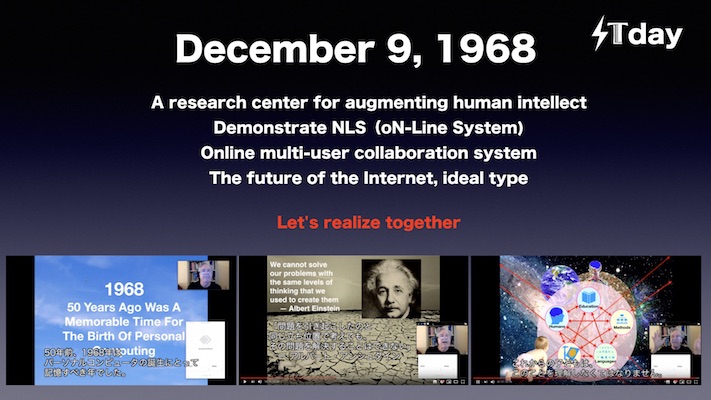